A book discussion group for Adelphi University faculty and staff.

Please join us in the Kelly Room at Swirbul Library.

Light from Other Stars 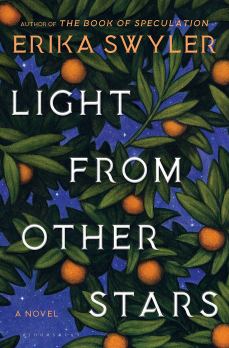 Light from Other Stars, by Erika Swyler

Eleven-year-old Nedda Papas is obsessed with becoming an astronaut. In 1986 in Easter, a small Florida Space Coast town, her dreams seem almost within reach--if she can just grow up fast enough. Theo, the scientist father she idolizes, is consumed by his own obsessions. Laid off from his job at NASA and still reeling from the loss of Nedda's newborn brother several years before, Theo turns to the dangerous dream of extending his daughter's childhood just a little longer. The result is an invention that alters the fabric of time.

Decades later, Nedda has achieved her long-held dream and is traveling aboard the space ship Chawla, part of a small group hoping to colonize a distant planet. But as she floats in zero gravity, far from earth, she and her crewmates face a serious crisis. Nedda may hold the key to the solution, if she can come to terms with her past and the future that awaits her.

As Nedda faces mystery and danger both in the orange groves of her Florida childhood and the vastness of space as an adult, Light from Other Stars keenly illuminates the magical limits of science while exploring, in detail, the bonds of family, friendship, and love of home.

Tickets will be available beginning Monday, March 2 at 9:30 am.

There are two URLs you can choose from for tickets at the 2020 Eventbrite Ticket Page:

For a QR code, use https://cutt.ly/lireads2020tickets