THE GIRL WHO DRANK THE MOON 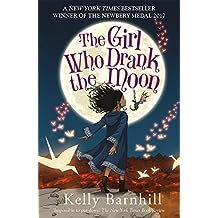 Gr 4–6—Once a year in the Protectorate there is a Day of Sacrifice. The youngest baby is taken by the Elders and left in the forest to die, thus appeasing the witch who threatens to destroy the village if not obeyed. Unbeknownst to the people, Xan, the witch of the forest, is kind and compassionate. When she discovers the first baby left as a sacrifice, she has no idea why it has been abandoned. She rescues the infants, feeds each one starlight, and delivers the shining infants to parents in the Outside Cities who love and care for them. On one occasion, Xan accidentally feeds a baby moonlight along with starlight, filling her with glowing magic. Xan is smitten with the beautiful baby girl, who has a crescent moon birthmark on her forehead, and chooses to raise her as her own child. Twists and turns emerge as the identity of the true evil witch becomes apparent.  VERDICT An expertly woven and enchanting offering for readers who love classic fairy tales.    School Library Journal